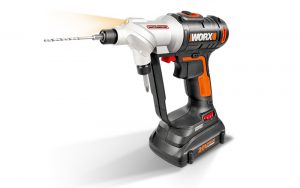 The WORX 20V Switchdriver™ 2-in-1 Drill and Driver has won a Gold award in the International Design Excellence Awards (IDEA®) 2017, hosted by the Industrial Designers Society of America (IDSA). Switchdriver won in the Home & Bath category.

Among the Top Award Winners, 25 designs won Gold and 52 designs won Silver, which were announced August 19 at the IDEA Ceremony.

“It’s an honor to be recognized by IDSA. We believe that Switchdriver is a concept whose time has come. Our approach was to make this drill and driver smart, functional and efficient.”

“IDSA IDEA 2017 winners demonstrate how designers are able to capture what’s invisible to others and inspire beauty through the smallest of details within the simplest of artifacts. Winners go beyond the tangible that we are so accustomed to seeing—to cultivate amazing, holistic ecosystems.”

Switchdriver has a rotating head with two ¼-inch chucks that can be loaded with different combinations of drill or driver bits. This allows the user to drill a pilot hole, for example, and quickly rotate the head to switch chucks and sink the screw with a driver bit. These quick-release chucks are easy to load and accept standard hex-shaped bits, which are widely available at hardware stores and home centers. This tool has plenty of power and to handle a wide range of projects.

Check out worx.com to learn more about the Switchdriver and various other power tools to add to your arsenal.