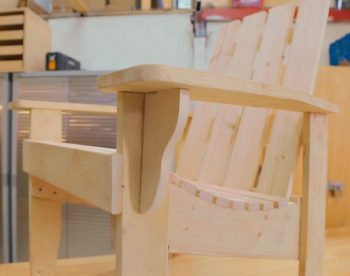 This Adirondack chair may not have all the flourishes of some elaborate (and harder to build) designs, but it’s more in the spirit of the original versions, which were simple to make and supremely comfortable. Making the chair doesn’t require any complex joinery or tight tolerances, so basic carpentry skills are all you’ll need. If you have a jigsaw and a drill/driver, you have almost all the tools required.

You can build this project using relatively inexpensive dimensional lumber. (See the cutting list for sizes.) The best choice is kiln-dried ACQ pressure-treated lumber, often labeled as KDAT (kiln-dried after treatment) because of its weather and rot resistance. This wood is durable and easy to work, but you’ll need to drill pilot holes for the screws to prevent splitting — more on that later. Of course, you can also use other rot-resistant woods such as white oak and cedar, or even untreated pine or poplar if you paint the chair. You’ll also need 1-3/8-in. stainless steel or hot-dipped galvanized deck screws because they provide the best corrosion resistance with ACQ-treated lumber.

As with any woodworking project, the best approach for this chair is to tackle it in stages. First, cut all the parts to size. Note that the legs A (front only), seat rails B, arms J and arm brackets K require pattern cuts. Refer to the patterns in the drawing for dimensions. The curves for the seat rails and arm brackets can be scaled up by drawing your own 1-in.-square grid on paper and then copying the curves onto it. (You could also scale up the drawing on your computer and print it out.) Don’t worry about the curves being perfect; they just need to be close.

Next, draw the cut lines on the stock; then cut the curves and angles with a jigsaw or a band saw. I used a miter saw for most of the straight cuts because it’s fast and accurate. Don’t worry if the cuts are a little rough; you can sand them smooth. If the saw blade splinters the edges, score the cut lines first with a utility knife to minimize splintering and tearout. Make the 15-degree cuts that establish the seat angle on the front and rear of the seat rails B before cutting the seat curves. Note that the seat curve on both seat rails should be as close to identical as possible.

Just a few other things to keep in mind: Not all lumberyards sell the 1×1-1/2 dimensional lumber you’ll need for the seat slats, so you may need to rip wider stock to size or substitute with a slightly different size. And it will save time if you ease all sharp edges with sandpaper before you start assembly.

Before you start the assembly process, it’s worth mentioning that drilling pilot holes and then installing screws can get pretty tedious if you constantly need to change bits. Having two drill/drivers is one solution, but I’ve been using a WORX SwitchDriver that has a patent-pending rotating dual chuck that significantly helps to speed up the process. You might also consider using a countersink drill bit to bore the pilot holes. This bit lets you set the drilling depth and bores a countersink for the screw head. Another option is to apply a little waterproof glue or construction adhesive between the parts to help reinforce the structure. I’d caution against using polyurethane glue because it expands as it cures, so it can get messy. (However, it is a very effective adhesive for outdoor applications.)

Now you need to make the back and side subassemblies. Assembling the sides accurately may be the most critical part of this project. Lay out the parts that comprise the chair sides (A,B) on a flat surface such as a workbench or a level floor. For the finished chair to sit level, it’s important that the two sides are square and identical. Use a carpenter’s square to check for square and a tape measure to confirm that the legs are parallel.

See the drawing for the dimensions that locate the seat rails at a 15-degree angle to the legs and mark the positions. (Remember, there’s a left side and a right side.) Place the seat rail on top of the legs and bore one pilot hole into each leg. Screw the parts together with one screw in each joint and then check to be sure the assembly is still square. Then you can add two or three more screws to each joint to secure the attachment. Finally, glue and screw the arm brackets K to the top center of each front leg on the outside.

Moving on to the back assembly, lay out the back slats F and mark the positions of the lower back brace G and upper back brace H. Check to be sure all the parts are square before gluing and screwing them together. I used two screws at each joint to prevent the assembly from twisting.

You should assemble the chair on a level surface to ensure that it won’t rock when finished. Attach the front stretcher C and rear stretcher D with glue and screws. Use just a few screws initially, check that all the legs are touching the ground; then drive the rest of the screws. Note that the front  stretcher stands 3/4-in. proud of the top of the legs so it will be flush with the front leg slat once it’s installed. Also, you should position the rear stretcher about 1 in. back from where the seat curve starts to allow room for the thickness of the back.

You’re on the home stretch now with just the seat slats and arms remaining. Lay out the seat slats on the chair so they’re evenly spaced and mark their positions. It’s really critical to bore pilot holes in the slats because they’re so close to the edge and can easily split if you don’t. Fasten the front and back slats first and then fill the rest in from either end. Now attach the arms by driving screws into the top of the legs and the arm brackets.

To prevent any errant splinters, go over the entire chair — or at least where you sit — with 120-grit sandpaper. Pay special attention to the top edge of the front stretcher by rounding it over so it doesn’t present an uncomfortably sharp edge.  A random-orbit sander works particularly well for this job.

Unless you want to apply a finish, the project is done. And if you’re like me, you probably want to relax with a cold one now that you have just the spot to enjoy it.

No. 8 x 1-3/8-in. stainless steel or hot-dipped galvanized deck screws

How to Get Your Yard Ready for Spring

How to Move Heavy Objects in the Yard

How to Get Rid of Standing Water in Your Yard
Category : How To, Project Ideas
Tags : Switchdriver